“It is hard to believe that NASA Mars rover Curiosity celebrated its eighth year of operation on the Red planet. To have our Washington State manufactured products on Mars is a matter of great gratification for us.” 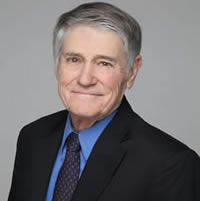 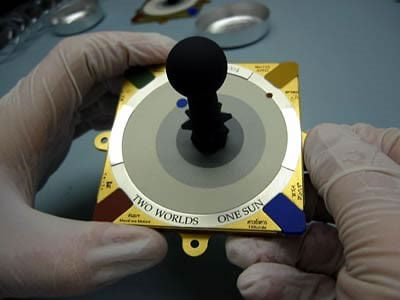 Jim Wright, the founder of Jet City Laser, personally engraved the face and sides of the Martian sundials launched on board the Mars rovers Spirit and Opportunity.

“I wanted everything to be perfect… a work of art.”  Says Mr. Wright.

NASA has manufactured five robotic rovers for the Mars exploration effort. They are:

“We approach the opportunity to be a small part of America’s space program with a lot of pride.”

“We did product identification work on the sundial on the Spirit and Opportunity Rovers. We did the sundial and the sabot part of the parachute deployment system for Curiosity and we did some load dispersion pads for Perseverance”.

The Science and Art Behind Jet City Laser

Jet City Laser dba UID2go uses a variety of technologies for part identification and traceability which include:

In the Mars rover projects, the NASA selected subcontractor specified the process to use, the subcontractor defined the base material to engrave and provided detailed engineering drawings and instructions.

The specification for these projects required the use of laser engraving. 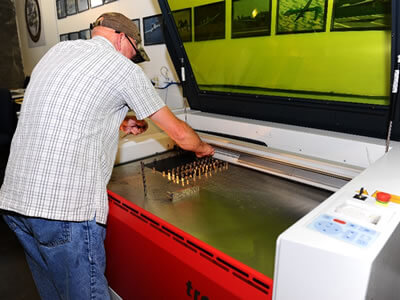 Laser engraving technology is traditionally used for engraving metal workpieces that will be exposed to various types of wear or surface treatments. A feature of this process is its ability to engrave machine-readable 2D codes that keep high readability rates after post-process treatments. Laser engraving can address the most complex traceability issues when the desired image engraved on the base material is expected to be exposed to high heat and cold, shot-blasting, or e-coating after the product is engraved.

Based on years of experience in material processing using lasers, Jet City Laser engineers selected one of the three laser wavelengths available to them, then further narrowed the process to be selected from one of two beam delivery technologies available. The goal was to provide a high resolution, high contrast, high precision, permanent mark on the customer specified base material. 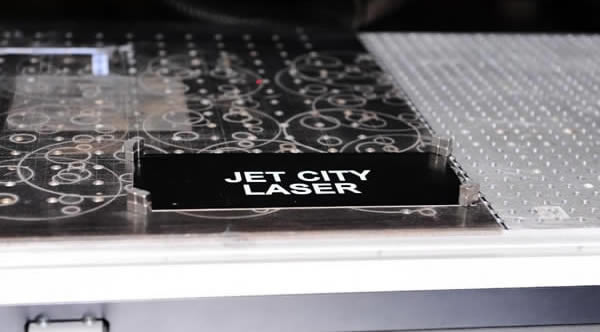 The Art of Laser Engraving

The art of engraving is in understanding the possible end results of choosing different image patterns that can be engraved by programming the laser beam to travel across a particular path. The laser beam’s engraving path and the focal plane are carefully chosen to achieve a consistent removal depth of material. For example, sometimes, non-crossover beam paths are desirable to ensure that each etched surface is exposed to the heat of the laser beam only once. This technique minimizes micro-fracturing of the base material and assures removal of the same amount of material throughout the final image.

On some base materials where micro-fracturing may not be of concern, a 90-degree crosshatch is desirable for controlling the final image’s reflected light. The crosshatch pattern obtains the best contrast when viewing under natural light.

Where are the NASA Mars Rover Parts Engraved by Jet City Laser Now?

NASA Mars rover Curiosity landed on Mars in 2012. The August 07, 2012 image below is a photo of the Mars Curiosity landing site, taken by an orbiting satellite.

Jet City Laser’s products are on the parachute back shell and on the Curiosity itself. 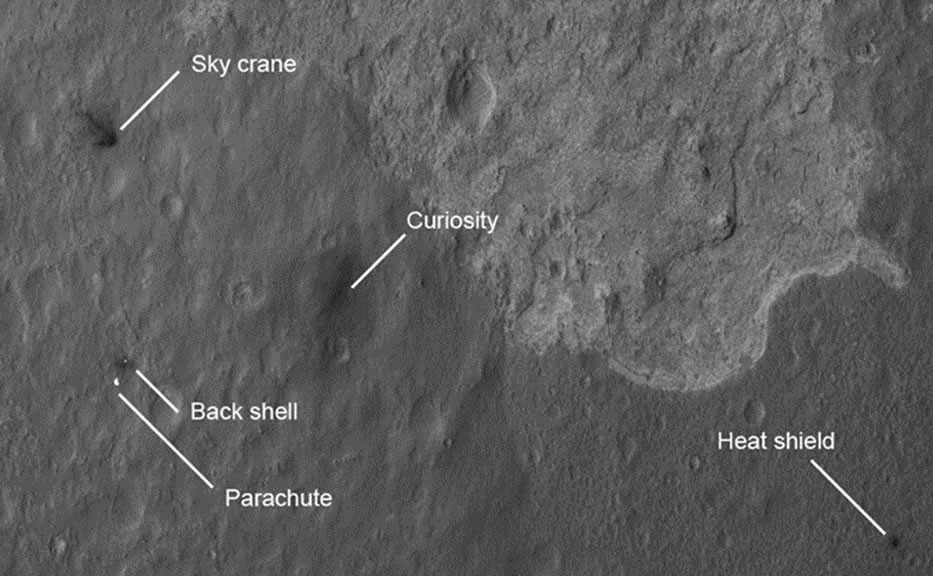 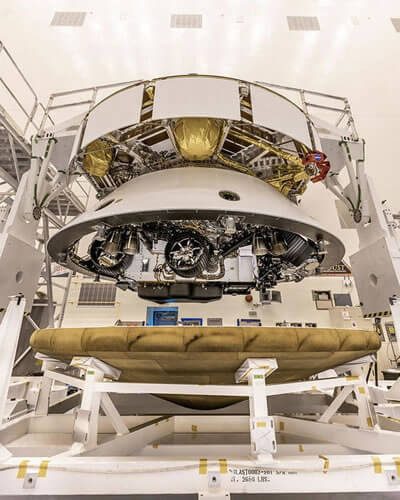 Launched in 2020, the Mars rover Perseverance rover (like Curiosity) includes a combination of entry, descent, and landing technologies inherited from past NASA Mars missions.

Jet City Laser’s products are on the parachute back shell and the Perseverance.

NASA stock photo of the Perseverance rover, with its six wheels folded up as it is being packed into its back shell and parachute assembly (center) before attachment of the spacecraft’s heat shield (bottom). A planetary cruise stage (top) will provide power and communications during the rover’s voyage to Mars.

Sojourner spent 83 days of a planned seven-day mission exploring the Martian terrain, snapping photographs, and taking chemical, atmospheric and other measurements. The rover had its last communication session with Earth at 3:23 AM PDT on September 27, 1997.

On June 10, 2018, a planet-wide dust storm effectively coated the solar battery recharging system. The last uplink to the rover Opportunity was attempted on February 12, 2019.  With no response, the rover recovery efforts were concluded, and the Opportunity mission was officially considered complete. During its operational life on the Red planet, the Opportunity rover traveled 28.06 miles.

Call Jet City Laser today at (206) 623-4949 or contact us online for more information about laser engraving for your project.